The Plague That Killed Athenian Democracy 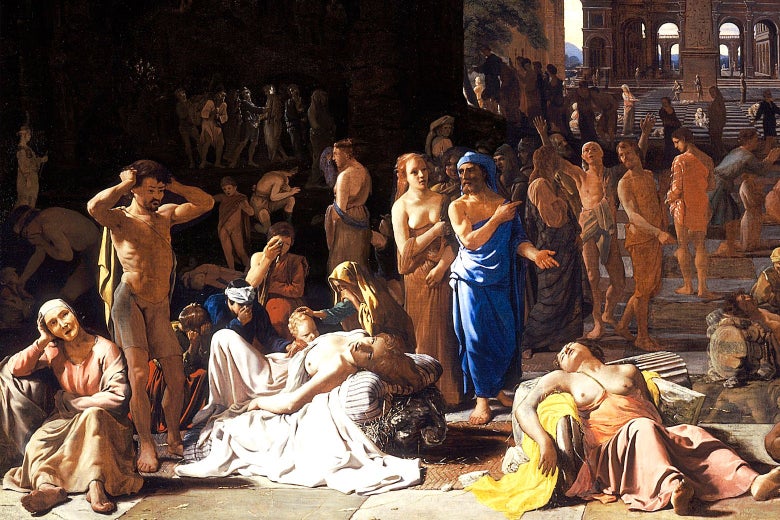 Thucydides does not identify the disease—typhus, smallpox, and Ebola have all been suspects—as he quickly moves from its impact on the human body to the body politic. Remarking upon the “spectacle of men dying like sheep, through having caught the infection in nursing each other,” he notes that “this sight led others to avoid the sick, emptying many houses of their residents for want of a nurse.” As houses emptied and burial sites filled, Athenians cast aside age-old traditions, throwing the bodies of loved ones into the closest funeral pyre. With the caving of rituals came the collapse of order, with men “now coolly venturing on what they had formerly done in a corner.” Now that there was no longer “fear of gods or law of man,” misrule became the rule. LINK

“I had a little bird, her name was Enza.”  “I opened up the window, and in flew Enza”

Israeli doctor in Italy: We no longer help those over 60

London (CNN)The UK’s response to the coronavirus pandemic was upended on Friday when the Prime Minister Boris Johnson and his top health minister tested positive for the infection, and his chief medical adviser self-isolated after displaying symptoms.

White House: We’re Going to Have to Let Some People Die So the Stock Market Can Live

What are they really saying? Donald Trump and the Republican Party are now openly willing to sacrifice those Americans they consider to be “useless eaters” — in this case older people, people with pre-existing health conditions and anyone else who may die from the coronavirus pandemic.

Republicans say the quiet part out loud: Americans must die of the coronavirus in order to save .

On Wednesday, Trump said the quiet part loud, basically admitting on Twitter that his electoral fortunes are tied to the pandemic’s impact on the American economy:

THIS is the one which catches my attention the most.  It seems that the movies that are produced to “program” us with are always the first to tell us what can/will happen in the future.  It better prepares us for the inevitable. PLEASE WATCH IT BEFORE IT IS TAKEN DOWN.  IT HAS ALREADY BEEN REMOVED FROM NETFLIX.  I CHECKED!

From a private message on Sunday, March 24th…….

This morning at 4:30 a.m., Canadian Prime Minister Justin Trudeau was served a criminal indictment by the U.S. for corporate and financial crimes. Media owners were instructed to brainwash everyone that Trudeau and his wife have the Corona virus, and that they won’t be leaving their house for a while.

Tom Hanks was arrested 48 hours ago for pedophilia and he is currently being kept in a hotel room in Australia, refusing to fly back to the USA. The next celebrity arrests will be Celine Dion, Madonna, Charles Barkley, and Kevin Spacey.  All will claim Corona virus infections

Italy’s airports have been completely shut down, as over 80 Vatican and financial officials have been served the same criminal indictments for financial crime, pedophilia, child trafficking, and sex abuse

Convicted Hollywood rapist Harvey Weinstein agreed to a deal in exchange for his testimony against hundreds of top Hollywood celebrities and their involvement in the drug business, pedophilia, and child trafficking. Instead of a 55-year sentence, he only received a 23-year sentence. In exchange he provided testimonies against some of the biggest and most powerful names, including Prince Andrew of the U.K., former president Bill Clinton, former vice president Joe Biden, Tom Hanks, Oprah, Ellen DeGeneres, Quentin Tarantino, Charlie Sheen, Bob Saget, Kevin Spacey, John Travolta, Steven Spielberg, Podesta, NXIVM and PIZZAGATE sex trafficking clubs, and hundreds more who all were directly involved with Jeffrey Epstein

CEOs of some major world corporations have been indicted/arrested, and some have been forced to resign — all in the last 30-60 days — such as the CEOs of the NBA, Harley Davidson, the Bill Gates Foundation, Intel, McDonald’s, Cesar Awards, and Disney; the Vatican Chief of Police; etc. Approximately 700-800 more resignations are coming in the next 3 months

The lab-created Corona virus was a cover-up for the mass mandatory vaccination agenda. Now it has become the biggest covert U.S. Intelligence operation that the world has ever seen. This mass 158,000-arrests operation will remove and capture the biggest evil and corrupted politicians, celebrities, and CEOs, including global elites and bankers such as George Soros, U.N. officials, and the founders of GRETA, inc.

President Trump will win the 2020 elections, and arrests of former U.S. presidents will occur in early 2021. All major arrests will be portrayed by the media as accidental or as conspiracy theories. All arrested individuals will be given “Rommel Death”, meaning that they will have a choice between their death bring portrayed to the public as a suicide or an accidental death in return for assurances that his or her reputation will remain intact, or, alternatively, they can choose to face a criminal trial that would result in public disgrace

Some top religious leaders will be arrested or forced to resign, and some will suddenly get “sick.” The Vatican will be the first, and the Pope will be removed in 2020. Production of human extracted Adrenochrome will be revealed, and Hollywood and the Vatican will be exposed as being directly responsible for that

Coming up there will be a 2-month complete shutdown of the world’s most common operations, such as schools, the stock exchange, some banks, airports, shipping, travel, events, galas, expos, sport games, sport championships, music award ceremonies, NBA/NHL/Baseball games, and ship cruises. (TEMPORARY)>> There will be food shortages and staged electricity power loss. Gas prices will go down, food costs will go up, insurance will go up, gold and silver stocks will fall, and many corporations will either go bankrupt or take a significant financial loss, such as in the case of what’s about to happen to Air Canada, Disney, and Coca-Cola

Welcome to the Great Awakening. What’s about to happen this summer and fall will change the world’s history

NOW IT ALL MAKES SENSE!!!

Just one man’s thoughts but possible,

I checked this out before posting they have all stepped down from their positions What are your thoughts ? They are all about to be exposed ? What in the hell is going on ?

CEO of Disney stepped down

CEO of Tinder, Hinge, OKcupid, Match all stepped down

CEO of Hulu stepped down

CEO of MedMen stepped down

CEO of Salesforce’s stepped down

CEO of Harley Davidson stepped down

CEO of IBM stepped down

CEO of T Mobile stepping down

CEO of LinkedIn stepping down

CEO of Mastercard is stepping down

Bill Gates steps down from board of Microsoft

Bet you didn’t know that Tom Hanks’ announced coronavirus diagnosis was a secret sign that he’s been arrested as part of a global pedophilia ring. And that NBA owners closed up shop for the same reason. Don’t believe me? Just ask a “Q person.”

In my thoughts, it WAS planned and pursued by some entity, either human or not, and carried out by someone most likely from this Planet. The “truth is out there”, somewhere.  Will we ever know for sure in our lifetime?  Doubtful.  But all things are possible.

Of all the “conspiracy theories” I have looked at you can always find something in them that is fact, but more that is not fact, or unproven.  The best thing we, as human beings can do right now is to try to support our brothers and sisters, (all of them), who live with us on Earth.  Do everything humanly possible to stay away from sickness and if you do have to care for someone do it as safely as possible, all the while knowing that you, or I, may very well be subjected to “the culling” that surrounds us.

It happened to my Grandmother in 1918, and may very well happen to myself or one of my children in 2020.

I am praying daily – not for myself, but for everyone.

The BEST thing I can think of to do at this point is to PLANT!!!

PLANT as many HEMP and/or Cannabis seeds as well as all other types of food and medicine herbs and plants that you can possibly get.

The Hemp will help heal the dirt/earth, the Cannabis is medicine. Whether it is treating symptoms or disease itself is irrelevant at this point. However, there is some evidence to show that Cannabis may be used to treat this.

In Part 3 I will address the Cannabis/Marijuana/Hemp issues with regard to our lives now and in the future.  The time to plant any kind of cannabinoid is now.