IN REMEMBRANCE OF THOSE WE HAVE LOST …

I lost a very good friend this morning. Missy Griggs passed away. I’m letting all her friends on Facebook know so they can spark one up in her memory. Sometimes you don’t truly appreciate someone until they’re gone. I am going to miss Missy’s smile and straight forwardness. If it’s any consolation, I’m sure Missy is up there jamming with Jerry Garcia and Pigpen smoking heavenly bud. Peace  LINK

I JUST WANT EVERYONE TO KNOW THAT CHARLES ‘CHUCK’ BYRNES, AKA BURNMAN, HEMPROCK’S FRIEND AND FELLOW ACTIVIST, WHO RAN HEMPROCK TV SINCE 2003 AND WAS MY JOINT HOST ON HEMPROCK RADIO SINCE 2009, HAS JOINED JACK, GATEWOOD AND BEN ON THE OTHER SIDE OF OUR UNIVERSE THIS MORNING. HE’S BEEN FIGHTING STOMACH AND ESOPHAGUS CANCER SINCE HE WAS DIAGNOSED ON JAN 13TH.
I WANT THOSE OF YOU WHO LEFT HIM A MESSAGE OF SUPPORT TO KNOW THAT I GAVE THEM TO HIM ON 420 AND THAT HE WAS VERY TOUCHED BY YOU ALL AND HE FELT VERY LOVED. via lynne wilson

After a brave fight, Michelle succumbed to cancer on October 20, 2010. Her passion, strength and courage inspired so many people, and she will never be forgotten.

Her husband Jef, is continuing the work, so the Medicinal Cannabis Education Package and Medicinal T-Shirts are still available.

In her honour, a non profit will be established, the Michelle Rainey Foundation: Continuing Crohn’s, Cancer and Cannabis Research.

Anita Mayfield of Mississippi, ‎Nita T. Delta’s Daughter was with the USMJParty from 2003 until her death in May of 2011.  Shown above with Gatewood Galbraith in 2004.

Galbraith is best known as a perennial candidate for Kentucky Governor. His most recent campaign was in 2011 where he ran as an independent and garnered almost 9 percent of the votes. He was also an advocate for the legalization of cannabis.

Gatewood Galbraith died on January 3, 2012 at the age of 64. He has three daughters.

Published in The Courier-Journal on January 5, 2012

Galbraith, Louis Gatewood, 64, beloved father, grandfather, attorney and civil rights advocate, died peacefully at his home with family on Wednesday, Jan 4, 2012. Born in Carlisle, KY, he was the son of the late Henry Clay and Dollie Eliza Gatewood Galbraith. He was a former Marine, a graduate of the University of Kentucky, and the University of Kentucky College of Law. He was a humanitarian, friend, and author – who worked tirelessly for the people of Kentucky.

He is survived by his three daughters, Summer Galbraith Sears (Kate), Dunedin, New Zealand; Abby Sears Galbraith (Ryan Moldt); and Molly Galbraith, both of Lexington. He is also survived his two grandchildren, Connor Gatewood Moldt and Ella Grace Middleton Sears; his siblings, Don Lynam, Liz Whitehorn (Ken), Edna Hancock (Terrell), Hank Galbraith (Judy), Mike Galbraith (Julie), all of Lexington, Tim Galbraith (LuAnn) of Louisville; his former wife and the mother of his children, Susan C. Sears; his lifelong friend, Kim Eisner; and a host of nieces and nephews. He was preceded in death by his sister, Judy G. Lynam.

The visitation for family and very close friends will be held between 4-8 PM on Tuesday, January 10, 2012 at the Crown Plaza Campbell House, in the Colonial Ballroom. Parking is available at the rear of the Crown Plaza Campbell House. There will be a public gathering and a celebration of his extraordinary life — the location, date and time to be announced by his family. Milward-Broadway is in charge of arrangements.

Richard James Rawlings –  The U.S. Marijuana Party, did, on February 24, 2013, loose one of its first and most influential Presidents, 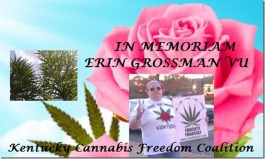 Ms. Erin Grossman Vu, a popular activist for medical marijuana in Kentucky passed from this life on April 10th, 2015.She was born May 30th, 1974.  She was 40 years old.She suffered from “congenital heart disease”.She passed at home where she was staying with Henry and Debbie Fox since December 2014.Kentucky Activist’s  lost a great partner in the fight for freedom from prohibition of Cannabis.HERE IS A LINK TO THE OBITUARY FROM NEWCOMER FUNERAL HOME

Chris Kenoyer, 54
PORTLAND — Chris Kenoyer, 54, of Portland, died peacefully at his home on May 7, 2014.
Born in Portland, and raised in Scarborough, he was the son of Jean Ellis and Margaret Johnson Kenoyer.
Chris found his focus in life with the Medical Marijuana field and became a nationally known activist despite suffering for many years from a variety of physical and mental illnesses.
He is survived by his daughter, Shawna Rowe and her husband Travis Ledbetter; and a grandson, Damien Ledbetter, all of Lewiston. He is also survived by four siblings, James Russell Kenoyer of Scarborough, Judith Kenoyer Stoy of Brunswick, Nancy Kenoyer Neely of Cape Elizabeth and Paul Johnson Kenoyer of Palm Bay, Fla. He is also survived by his good friend, Tonya Davis of Dayton, Ohio.
At his request services will be private. Arrangements by A.T. Hutchins, 660 Brighton Ave., Portland.

Published in Portland Press Herald/Maine Sunday Telegram on May 13, 2014 – See more at: http://obituaries.pressherald.com/obituaries/mainetoday-pressherald/obituary.aspx?page=lifestory&pid=171004408#sthash.4SMT6b76.dpuf

On Sunday, November 3rd, at approximately 7 a.m., TKP Thorne Peters was found deceased in his single person cell, where he had spent 22 hours a day, in “protective custody”, since being committed to the Penal Farm in Memphis Tennessee in 2018  LINK

Arrangements Being Made for TKP Thorne Peters

Other articles regarding TKP Thorne Peters

One Reply to “In Remembrance-Obituary”